With Sonia Bergamasco and Fabrizio Gifuni

Original music and free transcriptions based on themes by Mozart: Paolo Damiani 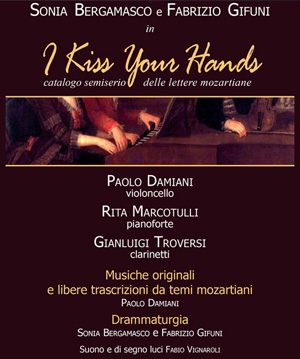 A brief history of the show

After premiering in the summer of 2006 in Rome, as part of the “Concerts in the Park” series, and also being hosted in the music section of Taormina Arte, I kiss your hands – a semi-serious catalogue of Mozart’s letters continued to develop in 2007, in collaboration with the SOLARES cultural foundation. Revised and expanded, the show – created by Sonia Bergamasco and Fabrizio Gifuni (creators and performers of the drama) and Paolo Damiani (creator and performer of the music) – undertook a successful 2007 tour to some of the most prestigious theatre and music festivals in Italy. Making use of invaluable collaboration with three other outstanding musicians - Gianluigi Trovesi (clarinettist), Danilo Rea and Rita Marcotulli (pianists, who alternate performances) - I Kiss your hands was presented on 7 July at Cesena (I Suoni del tempo), on the 14th at the Teatro Comunale in Bologna (L'estate del Bibiena) and on the 19th at the archeological site in Vulci (Il senso dei luoghi). On 22 July it was performed at the 2007 Ravello Festival and on the 25th and 26th at Nora, in the magnificent setting of the Roman theatre within one of the most beautiful archeological sites in this country (Festival la notte dei poeti). During the summer of 2008, the show went to Pesaro, Caserta and to the Roccella Jonica Jazz Festival.