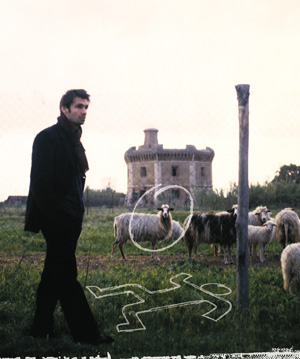 Notes about the show

"For Heraclitus, the world is nothing more than an illusory tissue of opposites. Each pair of opposites is an enigma, whose dissolution is unity, the God behind it all. "I still find in these words something that comes very close to that deep sense of mystery that includes the life, work and death of Pier Paolo Pasolini. A few years ago when I began to think about the idea of a show about Pasolini, it was in terms of opposition that my instinct was moving: father and son, nature and art, victim and perpetrator, were just some of the contradictions that continually came up along the way. But also darkness and light, violence and gentleness, Dr. Jekyll and Mr. Hyde. Of course, the political urgency was equally strong: so strong – In these dark times – that it threatened to overwhelm everything. The river is rising dangerously and may overflow its embankments. Every day that passes. There was also a desire to recount the public and private tragedy of a poet who had seen disappear in a mere three decades the only world in which he wanted to be recognized. The piercing, despairing cry of a man howling in the desert against the immorality and blindness of the old power that was opening the way to a New Power – a new fascism – “the most powerful and totalitarian that has ever been.” But also the very private tragedy of a man who, by virtue of the same political and anthropological policy that he saw befalling Italy, no longer recognized the ‘bodies’ of his beloved boys, who seemed to transform – before his eyes – from “likeable ruffians” into “spectral killers”. His beloved “riccetti” were doing an about-face: from innocence to crime. But that phrase, written by Giorgio Colli in his Birth of Philosophy in 1975, the very year of the death of the Casarsa poet but referring to the great sage of Ephesus, continued to spin its web like an invisible spider. And reading Petrolius (Petroleum) – a reckless journey through the ultimate labyrinth – took me back once again to that shadowy line: Carlo di Polis and Carlo di Tetis, protagonists in the unfinished novel, returned to shatter the ‘id (ego?)’. Like Paul of Tarsus. Like Paul of Casarsa. At the center of the maze was the foul beast. But it was nothing but the image of the hero reflected in a mirror. Moving to Una Nuova Gioventù (A New Youth), Narcissus, after endless dances, sank into his watery mirror. “I am a viola and an alder tree, the dark and the pale flesh…”, “I am black with love, neither Saint nor Devil…” “I am a priest and a free man, two excuses for not living…”. The shattering of, and obsession with, identity came back to move me. “We are, therefore, a single person (dissociation is the structure of structures: / the doubling of the character into two / is the greatest literary invention)” the poet states in Bestia da Stile (A Beast with Style). God is day night, winter summer, war peace, satiety hunger,” wrote Heraclitus in one of his fragments. I only had to follow the flow of the water.