From an idea by Fabrizio Gifuni

As with the performances of Gadda and Pasolini, an original text born of a personal job of dramaturgy on materials conceived by the poet as written words not intended for the stage. The backbone of this body of writing consists of a hilarious and melancholy early story (“Il blues delle cicche“The Cigarette Butt Blues”), acted in the first person by Masino, journalist and chansonnier, elusive alter ego of Pavese himself; vital limbs of this new poetic body, some of his most intense verses, as well as several passages from his private diaries. The journey takes us – through the sound of the music and words – all the way to the premature end of his life. The title of the show – “Non fate troppi pettegolezzi” (“Don’t Gossip So Much”) –refers to the last words the poet noted on a blank page of one of his books (“Dialogues with Leuco”)before he took his own life in Turin on a hot August night in 1950. The show – in the form of a concert – makes use of the invaluable collaboration with one of the most talented and well established pianists in recent generations: Cesare Picco. Thinking about the ‘non-relationship’ between Pavese and classical music, and of his passion for popular ditties, Picco interweaves his original music with the words of the poet.
Fabrizio Gifuni 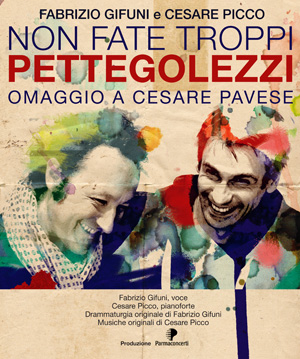