"Gadda Goes to War, or the Tragic History of Amleto Pirobutirro" - 2010

From an idea by Fabrizio Gifuni, based on texts by Carlo Emilio Gadda and William Shakespeare 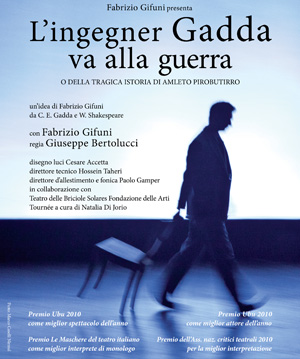 Four years after "Something Like a Very Long Cadaver"the show that laid the foundations – through Pasolini’s Lutherian and privateer prose and the heroic verse of Giorgio Somalvico – for theatrical reflection on the transformation of our country over the past forty years, Fabrizio Gifuni and Giuseppe Bertolucci took up the subject again, guided by the language and thinking of one of the 20th century’s greatest writers.

Notes about the show

A Hamlet no longer young, alone, with no father or mother to invoke or curse, with increasingly weaker nerves, choleric. Alone with his ghosts. Language buffeted by flashes of pure protean genius. Always on the verge of tragic madness, and yet, hilarious. And full of method. Oh yes, full of method. This is how I began to imagine Gadda. A ‘Hamlet Pirobutirro’ (protagonist-shadow of his greatest novel, La Cognizione del dolore (Acquainted with Grief) who rewinds the tape of his neurosis by walking backwards – like a crab – across the plain of memory. A descent into hell that reopens old, unhealed wounds. Until you come to the original wound. The one everything comes down to. For better or for worse. The cesspool of his future unhappiness, but also, perhaps, the inadvertent source of his immense art. The Engineer’s participation in the First World War (lieutenant in the territorial militia, infantry, 5th Alpine Regiment), the defeat at Caporetto, his detention in German prison camps and the death of his brother Enrico, were to change his life as a writer forever. But pain is never just a ‘private’ fact. On the contrary. It is always, inexorably ‘public’. With relentless progression, the fury of Gaddus began to mount up and fall, like the stroke of an axe, upon his country – which he was ready to defend with his life – upon its people, and upon its rulers. Written from the miserable observation post of the trenches, his Diaries of War and Captivity pierced the screen of any patriotic rhetoric to become an authentic, agonizing act of love. Having gained awareness of his pain, this aging Hamlet is now perfectly capable of analyzing the distortions of a cyclically ‘unhinged’ history. Gathering momentum, the flow is unstoppable. With the passing years (how many?), the total dementia of a frenzied people has now delivered his country to a tyrant who is obsessed with females; from narcissistic delirium to an ultra-histrionic, autoerotic maniac suffering from hereditary violence. The perfect sequel to a discussion begun several years ago, with the formative Lutheran, privateer reflections (of ‘Na specie de cadavere lunghissimo), this new chapter is presented to audiences as a consciously ‘sacred’ act – the secular ritual of a civilized society that would like to better itself – useful, perhaps, to anyone today who wants to try to pick up the threads of a social fabric in tatters. The social fabric of a country called Italy. The act of consciousness with which we must redeem ourselves – as Gadda says in Eros and Priapus – is a prelude to resurrection, if resurrection is possible amidst such horrific rubble.